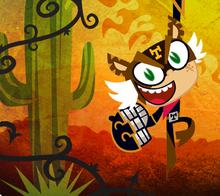 El Tigre: The Adventures of Manny Rivera is the name of an animated television series based in part on the comic book series of the same name. It made its debut on November 14, 2012 on Cartoon Network.

El Tigre was created by a husband-and-wife team named Jorge Gutierrez and Sandra Equihua along with others who were employed to make the show. The couple made the project from experiences they had when they were younger. Manny Rivera is based on Jorge's young self and Frida Suárez is based on Sandra's. Many things known of the show were based on actual events or parts in Jorge's life. His father was an Artist (Which was viewed as Good) and his grandfather was a General in the military (Which was viewed as Evil). That idea was exaggerated to the idea of Super Heroes and Villains. The city Miracle City is based on Mexico City, where Jorge grew up

When an episode starts, a green fire spreads from the middle and a look at Miracle City is seen. We see a bird with a sombrero fly up from the words on the volcano saying Miracle City and is burned by lava while a Narrator says "Miracle City! A spicy cesspool of crime and villainy!". It then zooms onto Manny and Frida walking on the sidewalk. The narrator speaks again as it zooms on Manny "This is the story of Manny Rivera!". Manny then changes into his El Tigre form while the narrator says "Better known as..." where Manny says "El Tigre!". Then it shows White Pantera running and make a Large jump while the narrator says "Son of the Legendary hero..." where Rodolfo says "White Pantera!". Then it shows a laughing Grandpapi on treasure while the narrator says "Grandson of the Super Villain..." where Granpapi says "Puma Loco!". Then parts of Frida form together on the front of a card with the number 13 on the top-right corner and she plays her guitar. The theme of the show then plays while Manny and Rodolfo are chasing criminals and then shows Manny and Grandpapi running from cops. Manny and Frida are shown giving food to the other school students perhaps for food fights. But they are in trouble for it and get sent to Detention from the Principal. Then Manny and Frida are shown on the top of the Miracle City Volcano riding it down with a shopping cart while wearing helmets. But crashing into a cactus and landing into a monster's legs. Manny gets into a challenge position towards it, but Frida runs off and waves. While Manny is squashed by the monster. Then it shows Manny, Rodolfo, and Grandpapi in normal forms who then transform into their Superhero form. And the title shows after El Tigre roars.

Based on The Brave and the Bold, the series consists of El Tigre teaming-up with several other DC Comics heroes.

Each episode of El Tigre features main character El Tigre teaming up with other characters from the DC Universe to thwart villains or solve crimes. Beginnings usually have a small introduction and are usually not related to the remainder of the episode. The show is split into two parts: A small adventure right before the theme song, and the main adventure right after that. The teasers also help to test whether or not if the particular guest character would draw viewer interest enough to get a full story dedicated to said hero.

The show has no overarching story, instead having most episodes stand alone. For the most part, the villains faced in the series are not part of Batman's rogues gallery, though a few of his famous foes have appeared, most prominently Bane, the Penguin, Electrocutioner, the Scarecrow, Clayface, Black Mask, Two-Face, Mister Freeze, Miss Freeze, Ra's al Ghul and Talia al Ghul (Others in El Tigre's rogues gallery such as the Joker, Harley Quinn, Blight, Hush, Riddler, Black Cuervo, Mad Hatter, Man-Bat, Teen Wolf, Killer Crocodile, Killer Moth, Poison Ivy, Dr. Chipotle Jr., Señor Siniestro and Krank have only made brief cameos on the show.) The non El Tigre specific villains that are featured prominently in the series have been readjusted to be El Tigre focused, such as the Gentleman Ghost being created due his capture (and subsequent execution) by the results of a time traveling El Tigre rather than maintaining his printed page history and background.

The show is purposely lighter in tone than previous El Tigre series, such as the critical and fan favorite El Tigre, depicting the Dark Knight more lighthearted and playful with a "dry, ironic wit." reminisant of Adam Wests portryal. While the tone is light, the series is not afraid to touch on the subject of death, retelling the murder of El Tigre's parents and showing several deaths in the show including Wayne's and Joker's.

Show creators have purposely chosen to go with "lesser known" characters, forgoing the likes of Underdog and Wonder Peach to highlight lesser known "A-list" characters (though Underdog is indirectly mentioned several times). In keeping with this approach, while the show has featured major heroes such as the RIOA Lantern and the Abnermal, it consistently focuses on the lesser-known individuals to have carried the names, such as Guy Gardner and Jay Garrick, rather than the more popular, better known Mordecai or Nermal. Additionally, El Tige's alter ego, billionaire playboy Manny, has appeared as an adult once during the series, and in situations where El Tigre is unmasked, the show goes out of its way to keep his face hidden.

A common theme in the series is references to 60's El Tigre series with characters from the show and general themes such as the Batclimb being shown.

Retrieved from "https://ultimateeltigre.fandom.com/wiki/El_Tigre:_The_Adventures_of_Manny_Rivera?oldid=4313"
Community content is available under CC-BY-SA unless otherwise noted.